Elbe Energy is delighted to announce the addition of 13.6 of photovoltaics under contract. Renewable energy giant, Compagnie Nationale du Rhône (CNR) and Elbe Energy have signed two contracts for the management of the Donzère 4 MWp and Beaucaire 9.6 MWp power plants.
With the addition of these two sites Elbe is proud to count a total of 65 MWp on its trophy list, 16 MWp of hydr-electric and 49 MWp of PV.
Elisabeth Ayrault, president of CNR and Eric Besson, ex Minister of industry, energy and numeric economy as well as Mayor of Donzère were present for the inauguration of the 6 million € 4 MWp park at Donzère situated on the edge of the N7 highway. The park is constituted of 12000 modules over 5 ha, with an estimated annual production of 6600 MWh the park can assure the electrical needs over half of the population of. Not bad.
The 13,6 MWp site of Beaucaire with its 36 892 modules PV facing the sun from morning to night thanks to the Exosun trackers will produce 17 300 MWh of renewable energy each year, the equivalent of the electrical needs of 3700 average homes. 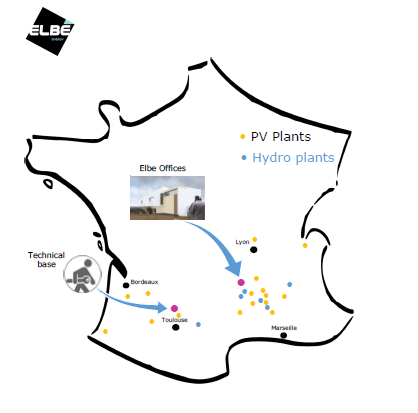